THE FOLLOWING INTERVIEW IS BETWEEN DR. PAOLO BREBER AND OUTLAW CANE CORSOS. (OCC) 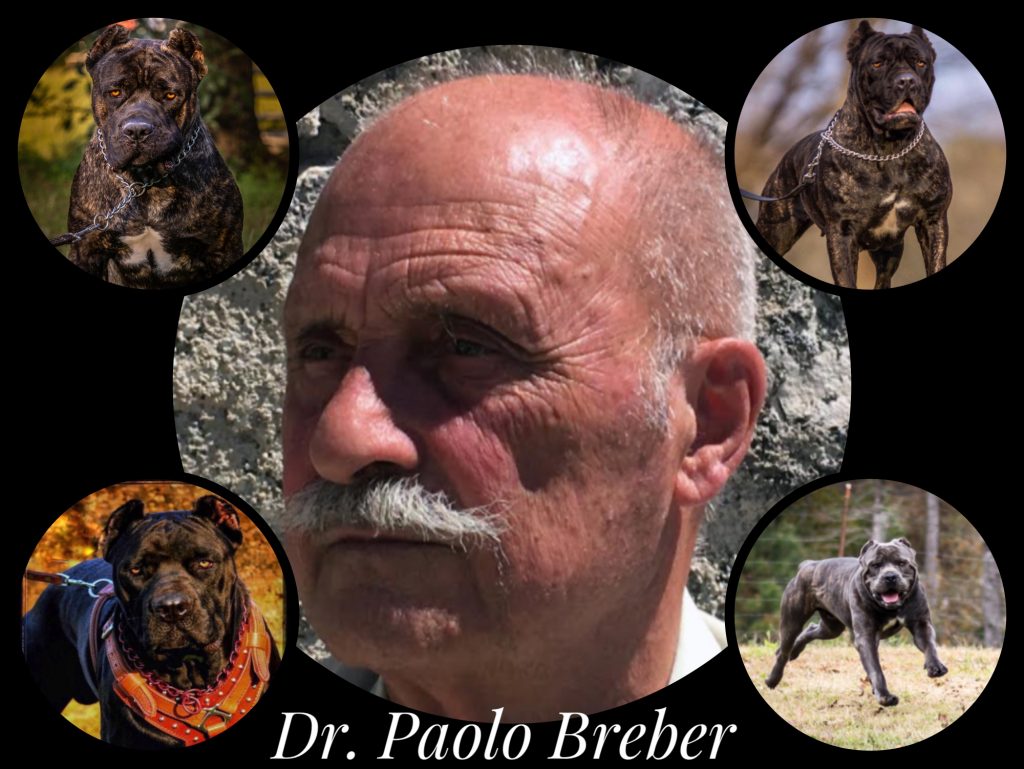 While no one can deny the work of Dr. Breber regarding the Cane Corso, if you search hard enough, you will find a couple of people that wish to disagree with him. Almost any negative comment can be traced back to the information below. I would like to express my view points on the subject for any one not familiar with the story.

Early on in the recovery of the breed, Dr. Breber took on a couple of young apprentices who showed great interest in his work. Long story short is these two younger men ended up being primarily interested in the monitory gain that could be made from the breed and the breed ‘s standing as a potential show dog. At the end of the day, greed and personal fame proved to be their motivation. They felt that the Cane Corso would end up showing better and could be more profitable if the dog had a shorter muzzle similar to the Boxer. Thereby disregarding the importance of the correct head and muzzle necessary for the dogs working abilities. It’s not that they didn’t know the truth from working with Dr. Breber, it’s just that they chose monitory gain and some sort of personal fame over what they knew to be true.

I can’t tell you how much I personally admire Dr. Breber for never succumbing to political pressure to change the truths about this historical breed. He has endured backstabbing and forfeited financial gain for his beliefs that the breed should remain historically accurate and not be changed into something it was never meant to be, primarily a show dog. It seems that in today’s times, men of principal like this are getting harder and harder to find.

When Dr. Breber refused to change the facts regarding the true traditional Cane Corso to conform with their “new vision” for the future of the breed, they began to attempt to discredit him and offer their version of the “new” Cane Corso. This “new” version was based off the Boxer, whom was very successful in the show ring during that era. The difference is Dr. Breber’s work was never about the exploitation of the breed for monitory gain or personal fame. It’s always been about the truth and facts regarding this treasured, historical breed.

What these men failed to realize was years later the people would end up being more interested in the legendary traits of the breed that made it so famous and sought after to begin with. It’s not difficult to find a Boxer-looking show ring dog with a watered down temperament.

Their version of the modern show-ring Cane Corso, and the true, traditional Cane Corso are 2 drastically different dogs. Many individuals are unaware of this. I personally find that once enthusiasts know there is a difference, the vast majority of them prefer the traditional, authentic version of the breed…. Outlaw Cane Corsos

OCC : 1. Dr. Breber, we have several more serious Cane Corso enthusiasts and other Cane Corso breeders that follow us, so please allow me to jump into some of the more in-depth portions of your research concerning the jaws and bite of the authentic Cane Corso. The Corso is a working catch dog and we hear stories of the Cane Corsos legendary biting and holding abilities whether it be with humans or animals. These dogs require a different type of bite in order to help achieve this level of performance. As some people know it is referred to as the “holding” bite which is different than the bite of a normal dog. Authorities say the traditional true Corso has the bite of a wolf. While I am aware that some aspects also have to do with proper temperament, would you mind quickly explaining why the correct scissor relationship of the teeth and the correct muzzle length of the dog are also necessary for this unique ability?

DR. Breber:  What does “bite of the wolf” mean? If it means how the upper and lower teeth come together when the mouth is shut then it’s the same as a scissors bite. But if it means how the wolf bites into its prey then I think there is a difference with the “holding bite” of the CC.

OCC:  Yes I was referring to the mechanical aspects of the bite.

OCC:  2. You have mentioned that the overall health of the current show Corso has greatly declined in comparison to the the traditional version of the breed. Here in the United States, it seems the current topic of conversation amongst show ring breeders involves “health testing“. They are referring to the modern DNA health test screenings. I recently wrote an article about this subject and referenced an interview between the AKC and Geneticist, Dr. Elinor Karlsson, whom is an expert and works in the field of Developmental Canine DNA testing. In her interview she warns the public about such testing currently being offered. She believes that greed is the current motivating factor for many of these companies. She states that while the field looks very promising, modern technology simply is not accurate enough to produce reliable results at this point in time. She was very concerned that some companies even offer these services at this time. (link to interview included below) At OCC we have always used the traditional methods of genetic manipulation via the selective breeding process, simply a combination of careful line breeding and culling, to help control unwanted genes (disease) within our blood line. My question to you is this; Does the traditional time tested method of genetic manipulation via the selective breeding process remain the best way to maintain and improve the health of the modern Corso, or is there an alternative method that would be better suited for this breed. https://www.akc.org/expert-advice/health/dog-dna-testing- genetic-screenings/

DR Breber : The reason why the traditional CC is so healthy in every sense is that it has come straight from the farms in south Italy. If you need the dog for work and it’s not up to its task you simply get rid of it. This is what hunters, cattle- and sheepmen do, and for their dogs there is no alternative to being healthy. One aspect of the CC I have recently come aware of. It seems that it is very long-lived for being a large dog.

Other breeds of the same size live about 10 years while the CC often reaches 15 yrs and more. This is a sure sign of health and vitality in the breed.
All this business with genetic health testing is the collateral effect of breeding for prizes at the dog shows where conformation comes before health.

OCC: 3. While on the subject of DNA testing I have one more question. DNA testing for breed purity is also becoming popular in the U.S. These same testing companies seem to suggest to people that DNA testing can currently be used for breed purity testing. Only upon closer examination they do admit that the testing currently offered may only be useful to help identify the genetic makeup of mixed breed dogs and cannot be used to confirm breed purity of a full blooded dog. They admit that the only test that can currently be used for a full blooded dog is a parental test which can only identify the sire and dam of a puppy in question. (a link from one of the major DNA Testing companies explaining this is included below). My question is, does correct assessment of phenotype (physical characteristics), and temperament remain the only way to identify a true traditional Cane Corso?

DR Breber:  DNA testing is significant only in the case of a wild species. Canine breeds are the product of human culture. Function, temperament, look and constant transmission of these to the progeny remain the only way to identify a canine breed. Who cares what the DNA shows?

OCC: 4. As you may be aware, here in the United States there is much confusion regarding the Cane Corso and the breeds origin. There are a couple of breeders, with a presence on social media, (such as YouTube) who insist that the Cane Corso and the Neapolitan Mastiff were the same breed until as recently as the 1950’s. At which point they state that the breed was split into two breeds to produce the modern Neapolitan Mastiff and the Cane Corso, the Corso being the modern show ring version of this earlier breed. They even go so far as to suggest that if breeders want to produce a more “old school” version of the Cane Corso, all one would have to do is breed Neapolitan Mastiff back into the current Corso. According to them, this would theoretically produce a more old school, true, Cane Corso. While in truth, this would produce nothing more than a mutt and not any type of traditional Cane Corso whatsoever. Could you please help elaborate on why this would be so?

DR Breber: I have shown on the basis of historical documents that a dog with the name, look, and function of today’s Cane Corso has existed in Italy without interruption at least from the 14th century. On the other hand we know nothing of the dog called Mastino Napoletano before the 1950s. All the rest is idle speculation and storytelling.