To say that without the work of Dr. Paolo Breber (biologist) the Cane Corso breed would now be extinct and you would have had no idea of what a Cane Corso was, would not be far from the truth. Dr. Breber is considered the worlds leading authority on the Cane Corso and is directly responsible for the recovery of this legendary breed from Italy. He has dedicated decades of his life’s work to this breed and it’s recovery. His work is well documented and published

We are very fortunate to have Dr. Breber prepare some written articles about the Cane Corso just for Outlaw Cane Corsos. Please enjoy and share. 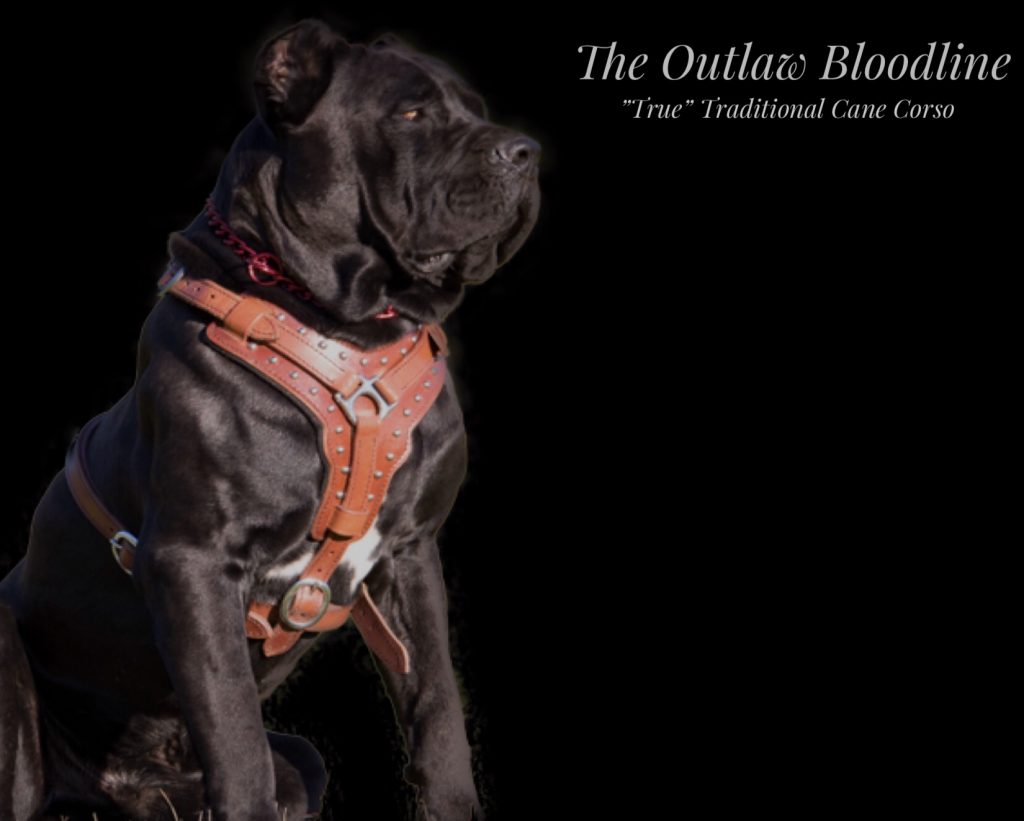 When one looks for information about the Cane Corso the feature that always comes foremost is its fighting temperament. We read about how the Roman legions took it into battle to attack poor barbarians. How much this tale is based on history I cannot say, but it is true however that the Cane Corso is a catch dog whose job has always been to tackle with reckless courage such dangerous and powerful animals as bulls, hogs, wild boars, bears, and others. This capacity is interpreted by some as fierceness, and the dog is sometimes listed among the breeds unsafe to keep. But the combative and fearless temperament of the Cane Corso cannot be simply defined as mindless savagery. In actual fact, its nature is quite the opposite. When not aroused it is a calm and low-strung dog, very much a family dog. The ancients considered the mastiff/catch dog, of which the Cane Corso is a perfect representative, as a cross between dog and tiger. This idea, which by the way is very difficult to believe biologically, was inspired by its cat-like temper. Like a cat the Cane Corso loves to laze on a soft couch in the warmth of a home, preferably next to its owner. But then, like the tiger, turns into a juggernaut when it triggers off. And then of course the stripes of its brindle coat fancifully suggest a tiger ancestry. Among dogs the brindle coat originated with the mastiff; any other type, like the greyhound, which shows these stripes indicates an influence of the former.

The dream situation for a Cane Corso is to live constantly by the side of its master. It is a companion to be owned singly without other dogs around; its extraordinary potential will hardly emerge properly if it has to live long hours by itself in a garden or pen without anything to do. By keeping it by your side from the time it is a puppy it will learn to read your mind. The anecdotes I garnered on this aspect from old-timers suggest a quasi-supernatural understanding between man and beast. How else can one explain the following story. The setting is a typical rural town in the south of Italy and the events recounted here are from the recent past. A man has been for days in the throes of deep agitation. He has been slighted and can find no peace. I do not recall the reason given me for this state of mind but I am sure it would have been of the usual sort: inheritance, money, land, or women. The man cannot rest, he is black with rage. The moment comes he cannot stand it any longer. He gets up from where he is lying and staggers to the closet for his shotgun. It is decided; there is no other way; he must blast his enemy to kingdom come. But what about his corso Tigrò? Up to now lying there silent and thoughtful, it promptly reacts to the turn of the situation and places himself between man and gun. “Get out of the way Tigrò!” says the man, but receives a growl and a hard look instead. The man still does not get the message and Tigrò shows his teeth. Hesitation sets in, the paroxysm subsides and then it is gone. The man never tired of telling me how Tigrò stopped him from ruining his life. Who can rationally explain the workings of the canine mind in this latter episode?

This marked empathy with its master is not a prerogative of the Cane Corso but is a common feature of the mastiff category when in pure and original condition. Documents bear witness to this over the centuries. I cannot do better in this respect than cite the work of the famed Dr Caius: Of British Dogs, published in 1570.

“Mastiffs have the merit of loving they masters and hating their enemies. And so guard them on journeys, defending them from thieves and keeping them safe and sound, and so might also feel be called Defenders. And if ever their master is attacked by a multitude of men and falls, it has been found that they do not desert him even in death, but will lovingly and for many days endure hunger and cold, and if it should turn out will kill the murderer or at any rate betray him by they bark or anger or hostile assault, as though a witness of their master’s death.”

Notwithstanding the dominant fighting instinct in the dog, it is always controlled and controllable. I will quote another old source showing how the nature of the traditional Cane Corso is typical of the pure mastiff type. William Harrison in his Description of England printed in 1586 thus discourses.

“Some mastiffs are dangerous only at night, that those which are allowed to go loose about the house and yard are so gentle during the day that children may ride on their backs and play with them as they desire, but some are so jealous that if a stranger embraces or touches them the dogs will attack him furiously. The one that I kept would not suffer any man to bring in his weapon further than the gate. Or if I punished my children the dog would gently take away the rod from my hand with his teeth.”
Two centuries later the special nature of the mastiff is confirmed by the German scientist Johann Friedrich Gmelin (The Animal Kingdom, 1792).

“Some mastiffs will permit a stranger to come into the yard, or place which he has been appointed to guard, and will go peaceably along with him through every part of it, so long as he touches nothing; but the moment he attempts to meddle with any of the goods, or endeavors to leave the place, he informs him, first by gentle growling, or if that is ineffectual, by harsher means, that he must neither do mischief nor go away; and never uses violence unless resisted; will even, in this case, seize the person, throw him down, and hold him there for hours, or until relieved, without biting.”

I can bear witness to this behavior from my personal experience. An old-timer friend of mine who has a dairy farm down in Puglia, one of the very few places where one could find pure Cane Corsos back in the 1970s, always leaves his main dog the free run of the grounds. There is no problem for a visitor who turns up unexpectedly during the daytime. As one gets out of the car this muscular, rather daunting corso comes up to inquire who it is, always well-mannered and without hostility. He will let you pat him on his head. It is advised, however, not to approach where the cows are kept. If you are careless in this he will place himself between you and the cows shed, and glare at you warningly straight in the face.

If in some other occasion the confrontation with a corso precipitates into an actual assault this does not necessarily mean being torn to pieces, as might generally be expected. I know about the circumstances of two episodes of aggression that really took place. In the first case the future victim decided one day to pay a visit to a friend. This friend bred cani corso which were usually kept in pens within the large courtyard of the house. Arriving at the gate our man called out but received no answer. It was early afternoon and the owner must have been taking his nap. After a while of waiting the man decided to let himself in anyway. He looked through the gate bars and saw no sign of loose dogs. He lifted the latch, opened the gate and started to walk towards the house. Suddenly, a large dark animal materialized. It was the personal dog of the owner of the house and therefore left free. It went straight at him, grabbed him by his arm and started to pull. This is the typical of the mastiff: there is no warning, no barking; at the approach of the stranger the dog first crouches and then leaps forward silently. Fortunately the man knew his dogs and kept his cool notwithstanding the painful grip; he managed to sit down on some steps, and tried to appease his foe by keeping perfectly still. In the face of such composure the dog settled down also, somewhat slightly relaxing its jaws but keeping a steady glare on the prisoner. Even the slightest stirring of the man caused an agonizing increase in pressure. At long last the owner appeared at the door. Alarmed and upset at the scene before him, with a quick word he freed his friend. Mortified, he inspected his arm but there were no lacerations; only a swelling and later bruises emerged to show for the vice-like hold. With its master on friendly terms with the visitor, the dog lost all trace of aggressiveness towards the recent intruder.

The other episode occurred in the similar situation of a man entering a home without telling the owner. The corso leapt at the intruder and knocked him down. In the effort to block him the dog fastened onto his shirt front and held him there. The man had to wait like that for an hour before the owner turned up and freed him. Aside from the unpleasantness of the experience the victim was unharmed.