What is the optimal size for a Cane Corso? Is bigger better?

Many novice Cane Corso enthusiasts (including new breeders) often believe that bigger must be better. Somehow they believe that a 180lb. dog must be a better or more intimidating guardian than a 120lb. dog. So the more girth the better! This is a common misconception here in the United States among enthusiasts with no actual “working” dog experience.

To address this we must first look at the CC and what it was originally bred for. The CC is a “working” dog breed. This means it should be bred to perform some type of job or task. The CC was originally bred to be a fighting dog and protect the Roman soldiers on the field of battle during hand to hand combat. It’s most commonly believed that this was done by the Roman Empire during the first century. The fighting dog at that time was known as the Canis Pugnax a Molossoid descendant. It’s believed by many experts that it was during this period that the breed was split into 2 separate breeds. The Cane Corso and the Neapolitan Mastiff. The Cane Corso was created to be a dog that was considered to be the perfect combination of courage, strength and power, speed, agility and endurance. They went through great lengths to produce a muscular and athletic dog that had great functionality as a fighting guardian. 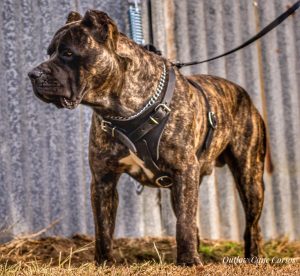 So what’s wrong with breeding the biggest and heaviest Corso possible?

Besides poorer health, more joint problems etc. It simply lacks the needed agility, speed and stamina to be an optimal protection/guardian dog. This holds true for any working breed not just the Corso. If you don’t believe me google any “working” dog trainer and ask their opinion on the subject.

In the United States it’s popular for breeders to breed for “size” so one of the easiest ways to do this is to cross in the Neopolitan Mastiff but still register the puppies as pure Cane Corsos (this is called hanging papers, a dishonest practice). While this produces a larger dog, it’s generally a fatter slower dog with saggy skin and much less athletic ability and stamina. Also these dogs will have much less of a bite force as compared to a true Cane Corso. The Bite force of a Neo. is 556-580psi. as compared to the 700psi bite force of the true Corso, which is one of the strongest in the world.

Pic’d below is Outlaw’s Jacks 28 inches at the shoulders and 127lbs. Although he is a little larger than the breed standard he still maintains great agility, speed and good endurance combined with tremendous power and strength. Notice the smaller athletic waist which allows for fast lateral movement along with the heavily muscled rear legs used to generate great explosive speed and power. Just like human athletes, correct proportions are essential for a True Traditional Cane Corso. 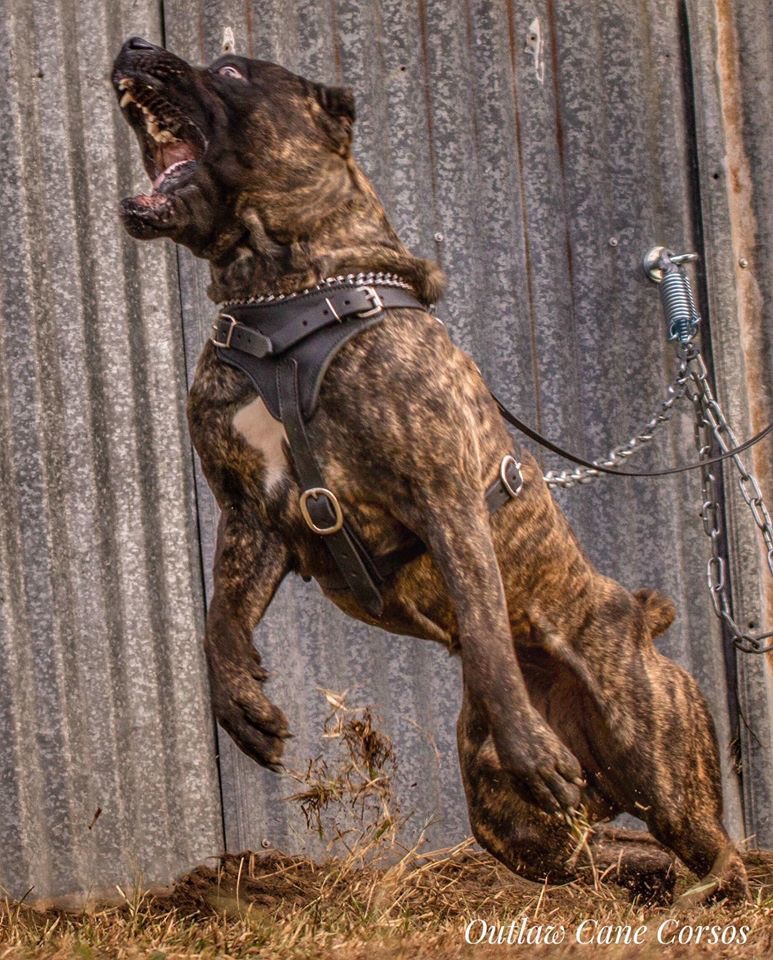